Difference (from prior minor revision) 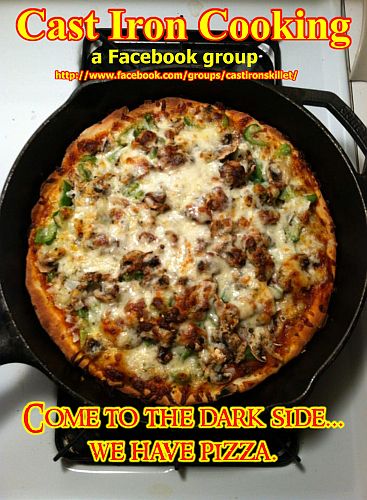 Direct links to the Facebook group via this Web site:

In April of 2011, I went looking on Facebook for an active community of people who were interested in cooking with cast iron pots and pans. I didn't find any. So I went and created my own Facebook community. Over 100 people joined in the first two days of the group's existence. By October of 2011 we'd surpassed 500 members; while at the beginning of May 2012 we were over 2,100! I've made some good friends on there in the past several months, and this group was the inspiration for me to make the journey to Ohio for the 2011 National Dutch Oven Gathering (National DOG). It had a lot of activity and collected over 2,900 "likes," until I shut the page down in July of 2012 and began THIS "group" instead. Why was the original page shut down? Facebook's stupid "timeline."

In March or so of 2012, the Cast Iron Cooking page was forced to accept the "Timeline" setup. That meant only ONE person, the moderator, could post pictures and text posts on the front of the page. All other postings from everyone else were shuffled off to the "Posts By Others" section of the site. I did not want that, and I resisted it for as long as I could. From the beginning, I had wanted this to be a community where everyone could post pictures and messages equally, so that they could be seen and enjoyed by everyone. Finally, in July of 2012 I decided there was no choice but to start over from scratch. So I sent out a notice to everyone, and after two weeks I shut down the page and began this "group" instead, on July 10th, 2012. The new group took off like a shot, attracting 100 members in its first 24 hours of existence. It seemed to grow exponentially and at an ever-increasing rate: One year later, on July 10, 2013. we were at 4,600 members and seeing more activity than nearly any other cooking group on Facebook.

But even this was only the beginning. Immediately after the one year mark, Facebook began listing this group in its notices of "Recommended Groups" for everyone with an interest in cooking. This resulted in a flood of new members, with people joining the group at a rate far greater than ever before. The flurry of new activity made it necessary to select new moderators for the group, and we were fortunate to be joined by a group of folks who shared the original aim of the group. That aim has always been simple: HAVE FUN cooking in cast iron – and NO POLITICS. Why should we spend time and effort arguing over a subject as innocent as cooking? It's certainly not religion or politics!

But the membership of the group continued to grow – so that as of January 2014, only six months later, the group had reached a milestone of 25,000 members! We even put together a YouTube video marking the continued growth of our group: Cast Iron Cooking: 20,000 members. This was only one month before the group reached 25,000!

This is a fine and friendly group of people who gather to cheer each other on, talk about their cast iron wares, and cook! 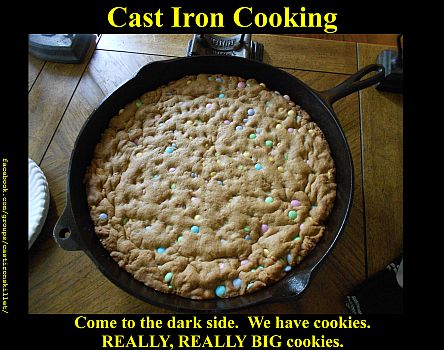